Learn more: What are refugees rights?

According to the 1951 United Nations Convention Relating to the Status of Refugees, a refugee is someone who 'owing to a well-founded fear of being persecuted for reasons of race, religion, nationality, membership of a particular social group or political opinion, is outside the country of his nationality, and is unable to, or owing to such fear, is unwilling to avail himself of the protection of that country'.

What are the rights of a refugee?

The number of refugees increased significantly as a result of World War II (1939-1945) and in July 1951, the United Nations Convention relating to the Status of Refugees was adopted.

Is a refugee the same as a migrant?

There is a distinction between migrants, internally displaced persons and refugees.

Migrants choose to move in order to improve the future prospects of themselves and their families.

Refugees have to move if they are to save their lives or preserve their freedom.

As citizens, they retain all of their rights and protection under both human rights and international humanitarian law.

An asylum-seeker is someone who says he or she is a refugee, but whose claim has not yet been definitively evaluated. On average, about 1 million people seek asylum on an individual basis every year.

How many refugees are there?

The latest figures show that there were an estimated 22.5 million refugees worldwide as of mid-2017. People who are refugees may have fled their homeland due to war and conflict or because they have been persecuted (or lived in fear of persecution) for their religion, nationality or political opinion. Essentially refugees have no protection from their own state and in some cases it is their own government that forces them to leave their homes. Many refugees must leave their homes in a hurry, taking only what they can carry and therefore rely on other countries to let them in and to support them. Without that support they are in constant danger and without rights. During 2017, conflict and persecution forced an average of 28,300 persons per day to flee their homes and seek protection elsewhere.

The Syria crisis and refugees

Over 5 million people have fled Syria since 2011, seeking safety in Lebanon, Turkey, Jordan and beyond. A further 6.3 million are displaced inside Syria, with 4.5 million in hard-to-reach and besieged areas. Palestine refugees from Syria have been severely affected by the ongoing armed conflict, with virtually all of their residential areas experiencing armed engagements or the use of heavy weapons. Of the total 438,000 Palestine refugees in Syria, almost all require assistance. 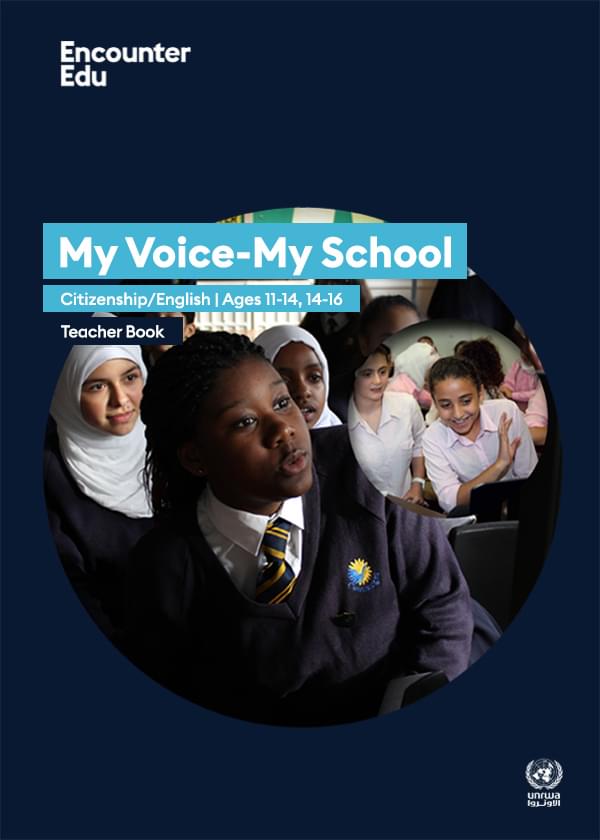 My Voice-My School focuses on the topic of quality education as enshrined in the United Nations Global Goals for Sustainable Development. Connecting UNRWA's schools with partner schools overseas, the project seeks to stimulate student conversation about quality education and what individuals and communities can do to help make it a reality for all.