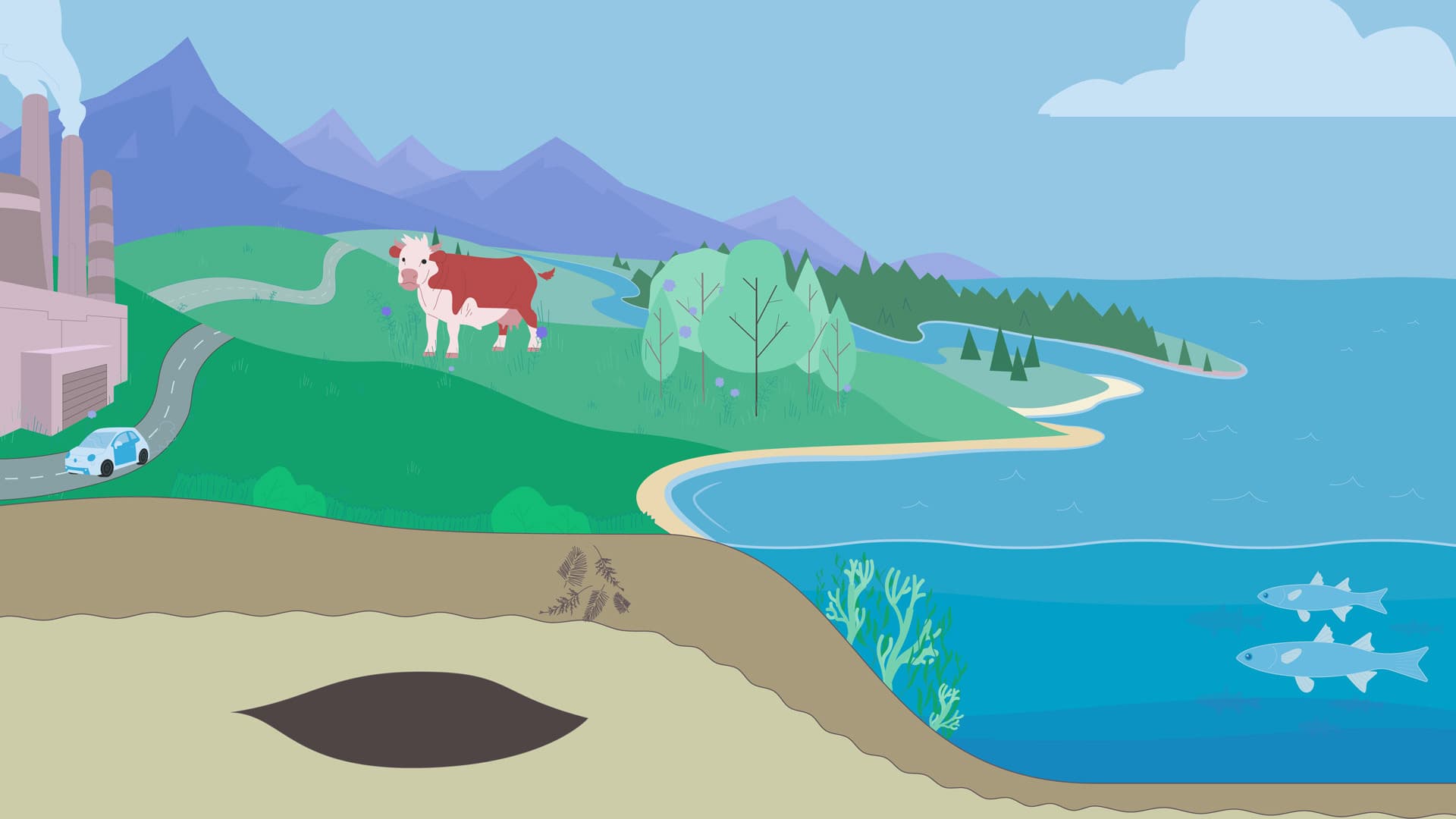 This group activity is designed to deepen students’ understanding of the carbon cycle. It is aimed at upper primary classes, as it represents a simplified model of how carbon moves. Students will develop their understanding of how carbon moves between the atmosphere, plants, and animals, as well as how the burning of fossil fuels over the past 250 years has caused an imbalance in the carbon cycle.

This is a group activity based on a class of 26-30 students. Depending on the group size, the numbers listed below may need altering. Guidance on specific changes is given in the Group size options section below.

Download the Carbon cycle role play cards from the What you’ll need section. Stick up the ‘team area’ cards on four walls of a classroom. Assign students to each of the team areas based on the numbers in the diagram below with:

As students move around the classroom, you can ask questions about what their movement represents. Below are some model statements.

Moving from atmosphere to plants
I am carbon (dioxide) being absorbed by plants and turned into food to help me grow.

Moving from the ocean to plants
I am carbon (dioxide), dissolved in the ocean, being absorbed by plants and turned in to food to help me grow.

Moving from plants to animals
I am carbon being eaten (consumed) by animals.

Moving from plants to atmosphere
I am carbon being emitted into the atmosphere by plants as I use my food for energy.

Moving from plants to the ocean
I am carbon being emitted into the ocean by plants as I used my food for energy.

Moving from animals to the ocean
I am carbon being emitted into the ocean by animals as I used food for energy.

Moving from animals to atmosphere
I am carbon being emitted into the atmosphere by animals as I use food for energy.

The options below give some guidelines on changing the team sizes for smaller groups. You will need to edit the text on the instruction slides as well to fit with any changes.

Of course, there are other processes at work too. Science teams are investigating everything from the rate at which carbon is absorbed into the ocean, to how worms ‘pull’ carbon into the soil and seabed sediments and store it away. More complex models of the carbon cycle can be viewed in the Carbon cycle interactive diagrams for lower secondary [linked] and upper secondary [linked] students.

The amount of carbon in different parts of our planet are known as stores. The most simplified version of these stores divides the planet into four parts or spheres:

These stores and fluxes are represented very approximately in this activity, but the key points in terms of numbers are:

For the activity, the number of students moving around the classroom has been altered to make it a little more fun, with more students moving than staying in the same place.

See the carbon stores and fluxes interactive for a more detailed diagram with up-to-date figures.